About Grokrocks admin 2018-02-05T17:57:17-05:00
"grokmeditations are quick and easy. They were designed to be used daily as it is the power of repetition that unlocks the door to personal transformation."
- Yogi Jeana Lynn

Everyone has something they would like to change in their life, but often they get stuck or just don’t know how to make the change. grokrocks and grokmeditations were created as quick, simple and effective tools to help anyone and everyone create the change they are looking for. grokrocks are healing crystals specifically chosen to help shift energy and drive change. Our energetic state is what determines the reality in which we live. Energetically, we are impacted by both external and internal forces. Each grokrock serves as our own personal positive energetic stimulator, harmonizing and redirecting our energy, and setting the stage for us to make our needed change. grokmeditations are simple and quick (most are less than 10 minutes) guided meditations that will relax the mind, release blocked energy and redirect our thoughts, allowing for personal growth and change. Since our thoughts create the energy that determines the reality in which we live, to create change we must alter the way we think. Each grokmeditation is specifically paired with a grokrock to accelerate this transformative process.

LEARN ABOUT THE POWER OF THE ROCKS

Turquoise is one of the oldest stones used by man; from warriors to healers to royalty to the common man. The healing properties of turquoise have been sought after for thousands of years.

Turquoise is best used to attract power, luck, success and protection. Its color and contour are soothing, to the eye and touch as if carved from heaven and dropped one earth.

Turquoise lives with its owner, as a friend mirroring their strength, success, fear and pain. This stone is impacted by the energy of its user, something it simply can not hide. It’s color and luster lessens when its user is sick or weak and brightens and deepens when its user regains strength, confidence and success. It will also change in color to warn of impending danger. Turquoise protects its owner from evil and restores clarity to the mind during difficult times. It promotes mental relaxation, releases fear and anxiety and is helpful in preventing panic attacks.

Energetically turquoise brings balance to its user through self realization, providing a clear vision to its users, allowing them to work through their issues in truth, releasing fear and anxiety while bringing peace and serenity.

is one of the most ancient of the healing crystals. Known as the stone of “contentment of the heart” it is a sensual stone used for thousands of years to foster romantic love, passion and devotion. It enhances sexuality, sensuality and intimacy. Garnet attracts positive thoughts, boosts energy and promotes self-love bringing warmth, devotion, understanding, trust, sincerity and honesty to relationships.

Garnet has been described from as far back as the Bronze Age over 5000 years ago, to the travels  of Noah where garnet reportedly supplied the light on the ark. It has been used not only to foster love but also to enhance faith, truth and consistency while relieving pain and depression.

Garnet acts with great speed bringing order to chaos and boosting energy while it revitalizes. Garnet not only attracts love, it provides protection from evil.

Citrine, known as the “success stone” or “merchants stone”, will bring prosperity abundance and success into your life. Used for thousands of years, merchants kept citrine with them at work and in their cash drawers, as they knew that citrine attracted abundance and money wherever it was placed. So keep your citrine grokrock in your wallet, your purse, your safe or wherever you are looking to increase your wealth!

Citrines works energetically by bring balance to the solar plexus chakra where it increase and clarifies inner strength, will power and creativity. It also will eliminate negative energy, bringing hope while clearing the path for positive growth, generosity and success. Because of its ability to remove negative energy, citrine also can be used to help alleviate depression, anger and mood swings.

One of the advantages of working with citrine is its ability to stay clean… energetically. Unlike other crystals that absorb negative energy requiring frequent cleaning, citrine cleanses itself. Citrine both repels and transforms negative energy into positive. The radiant features of this yellow healing crystal are sun-like; emitting warm, powerful, positive transformative energy.

Amethyst, known as the “gem of fire”, has been used for thousands of years for its healing abilities. It’s energy sparks passion, creativity and spirituality bringing logic strength and willpower.

The name amethyst comes fromm the Greek, ametusthos or “non-intoxicated” and has been used for thousands of years to prevent addictions of every kind. From excessive thoughts to excessive actions, amethyst can help to control them all.

Amethyst stimulates the crown chakra, calming thoughts while bringing clarity of mind. For this reason it is exceptional to use during meditation. Its calming abilities make it a natural reliever of stress of any kind, from fear to anxiety to depression and more. Amethyst is one of natures “energetic cleaners” do to its ability to dispel negative and attract positive energy bringing emotional stability and inner strength. For many, Amethyst serves as their energetic shield of protection.

Known as the Supreme Nurturer, red jasper is one of the oldest of the healing gemstones. Having been used for thousands of years by that ancient Egyptians, Babylonians and American Indians, red jasper is considered the ultimate grounding and healing stone.

It is the stone of endurance, a stimulator of chi or “life force”, bringing physical strength, energy, stamina, focus and determination into ones life. Its powerful healing qualities help to replenish energy while providing courage and confidence to those who use it.

Red Jasper is also a detoxifying stone and energetic protector. It can absorb and transmute negative energy, providing protection from electromagnetic radiation and other energetic pollutants. Red Jasper balances yin and yang keeping its user grounded stabilizing their root chakra.

Red Jasper is used in healing due to its ability to promote positive change. It brings joy into life by energizing parts of the body that have been sluggish, ill or inactive. Red Jasper brings truth, inspiration and motivation, stimulating creativity allowing one to manifest their dreams. 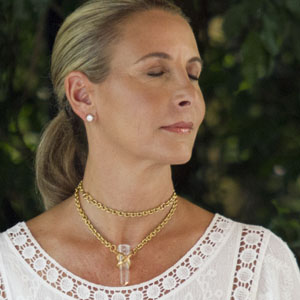 Yogi Jeana Lynn has spent over three decades in the health and fitness industry, focused on her passion of keeping the mind and body healthy. She is the author of Bliss, a self-help guide to peace, harmony and physical strength through yoga. She wrote and starred in the HGTV broadband show Everyday Yoga and developed Yoga for Kids helping children with low self-esteem.

Over the last 20 years, Yogi Jeana Lynn has worked with crystal healing energy and guided meditation. Combining these two techniques in her own unique way, she has been able to help transform the lives of many of her students. For years, Yogi Jeana Lynn’s healing gifts were only available to her clients on a one to one basis. Now, through grokrocks, her gifts are available to you!

WHERE YOU CAN FIND GROKROCKS

You can now find grokrocks at these fine locations. Check back soon for more!